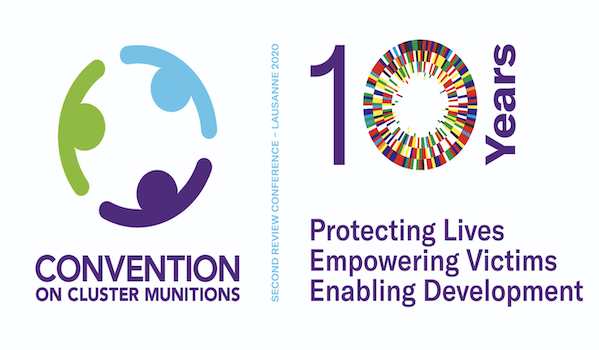 The Convention on Cluster Munitions Second Review Conference begins this week in a first ever virtual format, due to COVID19 response measures. The meeting, hosted by Convention Presidency Switzerland, will be held in two parts: from 25-27 November; and 4-5 February 2021 in hybrid format at the UN Palais des Nations in Geneva.

CMC campaign members from around the world will join Switzerland and Convention stakeholders for the three-day meeting and discussion of the Lausanne Action Plan for a world free of clustermunitions.

Follow the meeting live from 25 to 27 November, on the UN Web TV!

Throughouth the year CMC has been working closely with the Presidency and CCM stakeholders to gain wider visibility for the treaty and the horrendous impact of cluster munitions, and help push plans for as many ratifications and accessions as possible this year, in accordance with the Dubrovnik Action Plan and draft Lausanne Action Plan.

We’re calling on ALL states to join this life saving treaty immediately to prevent further death and suffering from internationally banned cluster munitions.

Five years ago, at the last Review Conference, States committed in the Dubrovnik Action Plan that they would strive to increase the number of States Parties to 130 by the 2RevCon. To date 121 states have endorsed the goals of the Convention, of which 108 have become States Parties and 13 still remain Signatories. This means we need to bring onboard another 22 countries to achieve the Dubrovnik goal!

We are asking Cluster Munition Coalition members to reach out to governments globally and call on those states not on board the Convention, to Join Now and put an end to the death and suffering caused by these weapons. You can find a template letter here. For more information contact CMC Advocacy and Campaigns Manager: diana@icblcmc.org.

See more on the CMC Calls to Action and Key Messages around the Review Conference, here.

The Programme of Work is available here.

The side event programme is available here.