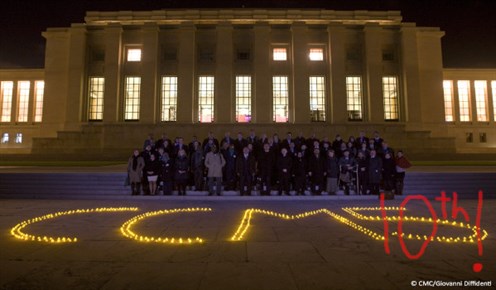 Ten years ago, on 1 August, the Convention on Cluster Munitions (CCM) became international law, paving the way for clearance of contaminated communities, destruction of stockpiles, and establishing the international norm banning all use and solidifying global condemnation of the weapon. The CCM was also the first multilateral treaty to include provisions for assistance to victims as a formal obligation for all States Parties with victims.

At the time, Cluster Munition Coalition (CMC) spokesperson Branislav Kapetanović, from Serbia, reflected that only a few years before, the idea of banning cluster bombs seemed an impossible dream.

“What this treaty shows is that ordinary people, including cluster bomb survivors like me, can be a part of extraordinary changes that bring real improvements to people’s lives all over the world,” said Kapetanović, a military munitions clearance specialist and cluster munition survivor, and now CMC Ambassador.

In the past ten years, some 1.5 million cluster munitions have been destroyed by 35 States Parties to the Convention. This means 99 per cent of the total global cluster munition stocks declared have been destroyed and can no longer kill or injure civilians – overwhelmingly the victims of cluster munitions, with a large proportion of these being children. Eleven countries in all, and nine States Parties, have also completed clearing their territory of cluster remnants, ensuring that their citizens are safe from this deadly legacy.

These gains are a testament to the collective power of states committed to end the suffering caused by cluster munitions, and to the promise of the Convention.

That promise is not yet fulfilled; ongoing use by the Syrian Government against civilians is a grim reminder of the toll cluster munitions are still taking. The legacy of suffering still being sown highlights the imperative to make every effort to stop all use immediately and loudly condemn use of the weapon anywhere, by anyone.

The solution to eradicating the weapon, and ending the death and suffering it causes, in Syria and elsewhere, lies in universal adoption of the Convention.

There were 108 countries on board when the Convention entered into force ten years ago,

Today, that number has grown to 121 countries. That progress falls short of the target of 130 States Parties by 2020, established at the First Review Conference of the CCM, and points to a need for new energy and commitment in order to ensure stigmatization against these nefarious weapons and the continued life-saving success of the Convention. The Cluster Munition Coalition is working steadfastly with stakeholders to bring states not party onboard as a matter of urgency.

The Convention will hold its Second Review Conference in November 2020 in Switzerland and the CMC is making all efforts to communicate the importance of the treaty to protecting civilians and promoting international humanitarian law.

Our message to states not party to the Convention is clear: join the CCM, help save lives, ensure survivors’ rights, prevent future suffering, and support livelihoods.