We are delighted to welcome Hector Guerra as the new Director of the International Campaign to Ban Landmines – Cluster Munition Coalition (ICBL-CMC). Hector brings to the ICBL-CMC a wealth of expertise on international disarmament and an ambitious vision for the future. He has contributed to the negotiation of the Arms Trade Treaty and Convention on the Prohibition of Nuclear Weapons. He is a co-founder of the Network for Human Security in Latin America and the Caribbean (SEHLAC), and a long-time contributor to the activities of the ICBL-CMC at the national, regional and international levels. He was a Secretary of the board of Amnesty International in Mexico and a member of the group of academic advisers to the ICRC delegation to Mexico. We look forward to working with Hector on our goal of reaching a mine-free world by 2025! 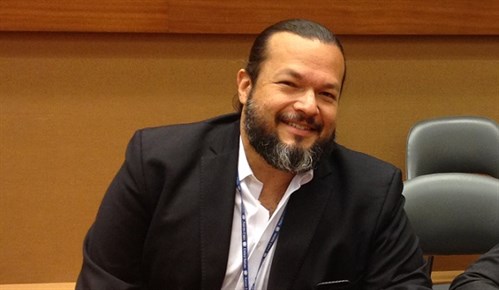 Our dear sister in the work for a mine-free world, ICBL Ambassador Margaret Arach Orech has been awarded the 2018 European Union Human Rights Defenders Award in Uganda!

Margaret’s work as Director of Uganda Landmine Survivors Association (ULSA), as Commissioner to the Interfaith Action for Peace in Africa (IFAPA) coalition, as board member of Uganda’s National Council for Disability (NCD), and as a partner to the Uganda Mine Action Center has led to today’s honor by the EU.

Margaret began her work by providing peer support to victims of conflict at local hospitals after narrowly surviving an ambush on her bus in Northern Uganda in 1998, due to which she lost a leg. In 2000, she felt that as a survivor herself, the best way to give back to the thousands of other survivors would be to advocate on their behalf, and she became an ambassador with the ICBL. Ever since, she has lobbied vigorously for persons with disabilities at international, regional, and national levels, and in 2014 was selected as a Woman PeaceMaker by the prestigious Joan B. Kroc Institute for Peace and Justice at the University of San Diego.

She explained that the announcement of the award came at a time when she was very low. “We have continued for the past two years with very limited resources. All efforts to secure funding failed, yet I get so many calls for assistance from survivors in the rural areas for one thing or the other. So the announcement gave me a push to keep working even on voluntary basis, because I have had the chance of carrying out advocacy on humanitarian treaties such as the Mine Ban Treaty, Convention on Cluster Munitions, and Nuclear Weapons Ban Treaty, both at home and at international fora and I am sort of a voice for those many ‘unknown survivors who may never get to be heard’ in affected areas around the world.”

Margaret, ever the activist, had a message for those going through a similarly difficult time working for campaigns the world over. “Any work for Humanity is not in vain even when you encounter setbacks. Persistence does yield positive results. I have not gotten the response I expect from my government, especially towards the ratification of the Convention on Cluster Munitions, but the work continues, no matter the unfavorable conditions.”

We at the ICBL-CMC would like to thank Margaret for all her work and persistence in the face of adversity, and offer her our heartfelt congratulations on receiving this prestigious honor!

Thank you Margaret. You inspire us all to do better.