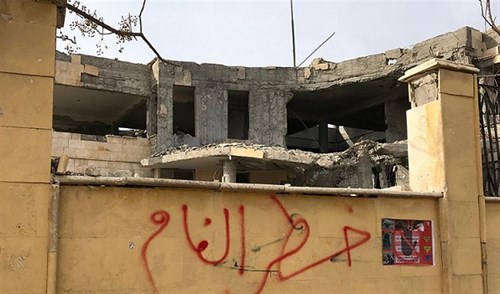 Warning about mines written on outside wall of building in Raqqa, Syria, January 21, 2018. © Human Rights Watch

Improvised landmines planted by the non-state armed group Islamic State have killed and injured hundreds of civilians, in Raqqa (Syria) since the armed group was pushed out of the city in October 2017.

In a press release issued on 12 February, Human Rights Watch presented the findings of a visit to the city in late January 2018, and information collected from the Kurdish Red Crescent and international medical organizations working in the area.

Most of the explosive devices appeared to be victim-activated and therefore banned under the 1997 Mine Ban Treaty, which Syria has not joined.

The local sources found that between October 21, 2017 and January 20, 2018, mines injured at least 491 people, including 157 children, many of whom died. The actual number of victims is expected to grow.

The risk of more casualties increases as larger number of residents return to Raqqa following the end of hostilities. According to local authorities, more than 14,500 families have returned to Raqqa.

Victims were injured by explosives that detonated when they moved a large bag of sugar left behind, or simply pushed open a bedroom door. Improvised mines have been found in “building doorways, under stairwells, debris piles, roadside, rubble piles and even buried in open fields.”